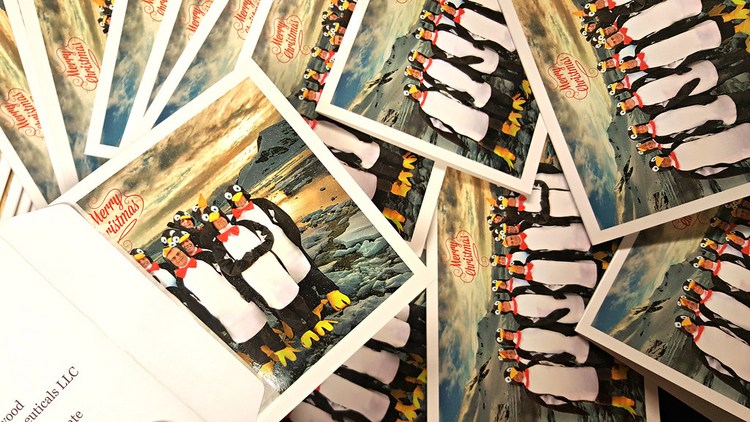 I recently discovered that I know one other person who makes Christmas cards. Although we approach the art from different angles. But we are agreed we are somewhat special for continuing the tradition long after most others have given up, largely because they are too lazy. I've been trying to get lazy too. There was a time when we put rows of strings across the ceiling of the office from end to end. And as customers and suppliers sent their greetings we hung them up. Hundreds of them. And, as a company, we used to buy a card design from one of those so-called charity catalogues where a miniscule part of the sale price of the cards is given to a proper charity. I hated the responsibility of picking the right card, especially when the designs in the catalogue didn't inspire me. One year I picked a very brown one, and had our company logo embossed in it. But when it arrived back from the printers I was told it was horrible and several hundred perfectly good Christmas cards were cast into the bin. A second, less offensive, card was chosen. That was 18 years ago. The next year I said it would just be better to buy some Santa costumes from Woolworths, Three for the Price of Two, and I got everyone to stand in the warehouse for a snap. I took a picture with an early 1.2MP Fuji camera and I added some digital snow to make a Christmassy card. It went down a storm with our customers and agents, especially those who had never met our staff and could now put a face to the name. Little did I know that I would be stuck with still doing the same thing seventeen years later. And the formula is the same. It mustn't cost more than buying a card, so there is no professional shoot, it has to be done in our warehouse in under ten minutes, and everyone must face the camera, no matter what they are attempting to do in the picture. But seventeen years on we were struggling for an idea. There have been many ridiculous and far fetched fantasy suggestions by some of the staff that went way beyond what I could possibly achieve, but a lot of them wanted to be elves this year. Again I couldn't conceive how we could make Santa's workshop in our warehouse in ten minutes and I suggested I wanted us to be penguins. "What have penguins got to do with Christmas?" I was asked. "Penguins are from the South Pole. Santa comes from the North Pole!" another said. "How do penguins look Christmassy?" yet another added. And then one character who shall remain nameless (although he really is called Craig) said, "Penguins are a protected species, and you are not allowed to do anything with them" inferring it was illegal to wear a penguin costume and pretend to be a penguin. After seventeen years of trying to uphold an important tradition I was close to breaking point in the face of so many objections and no positive contributions whatsoever. And there was little positive co-operation when it came to taking the photo either. They stood there. Some deliberately unsmiling or glum. Some happy to let their beaks fall across their faces. Some just glad to get away as fast as possible. So it was with relief that I was able to shove the 300 cards in their envelopes today and get them out of sight and out of mind for another year. The penguins however will live on. I enjoy dressing up and whilst I don't think penguin boy will be putting on a performance in the bedroom, I have ideas for other venues. After all everyone loves a little penguin, especially a lonely one, in a huge empty landscape. Believe me, you haven't seen the last of these. But back to the subject of making or even just sending Christmas cards. Nowadays so few businesses bother to send a card any more. They say they donate the money to charity but I don't believe most of them. The reality is they more than likely can't be arsed to do either. But they could send cards and give money to charity like we do. I'm glad there's at least one other individual out there who cares enough to spend some time and effort making something a bit special for someone else's enjoyment: someone who believes in keeping up traditions and sharing in the spirit of Christmas. It's easy to lose your values even if you manage to keep up your appearances.

This Business Cards Near Me Today - tq-express-penguin-christmas-card-2017 on net.photos image has 1024x576 pixels (original) and is uploaded to . The image size is 253880 byte. If you have a problem about intellectual property, child pornography or immature images with any of these pictures, please send report email to a webmaster at , to remove it from web.