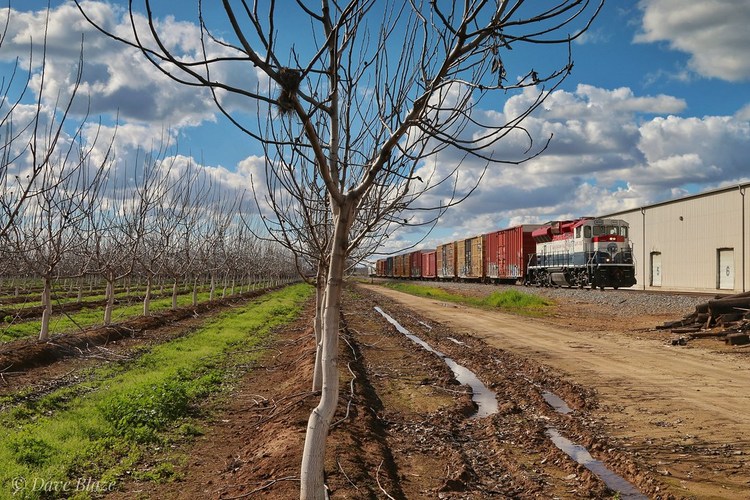 Apologies to Merle Haggard but maybe it's been my long love of his gritty soulful Americana sound that has always called my to California's Central Valley. And the words of Merle's song Tulare Dust come gentle on my mind as I think back to this shot. Back in winter 2017 I finally got a chance to visit this country for the first time when I met two friends for a California railfan trip focusing on the central valley and some of the shortlines and remaining street running trackage. One major goal of the trip was this train. The San Joaquin Valley Railroad's job on the old SP between Goshen and Exeter in the agricultural heartland of the central valley. Alas our two year old info was wrong and we missed him on Friday. To top that off it rained all day and we literally shot one train (an ugly graffiti covered geep running backwards hauling ten ballast hoppers) all day at nowhere interesting. Needless to say we were pretty bummed. After following the line all the way from Goshen to Exeter and not seeing anything moving I stopped in the SJVR office in Exeter and talked to the clerk. Alas for 'security reasons' she wouldn't give me any info. As I walked out I looked at the rack of business cards and saw a name I knew. Alex Engelke worked with me on the UP Salt Lake Service Unit a decade ago and now he's a trainmaster for the SJVR. Man, railroading really is a small world at times! Anyway, I called him and he was kind enough to return our call and tell us we missed the train Fri, but that they'd be calling an extra to run east from Goshen to Exeter on Saturday. So after a night in Fresno we followed the ex SP valley line south (east) this morning, and when we got off the highway in Goshen we heard him switching. After a couple hours of building their train (in the meantime we shot a few UP jobs and hit the local burger stand) they headed east. Amazingly the rail is almost all 75 lb and 110 or more years old so they were limited to 10 mph making for an easy chase. The main goal was the 12 blocks (.7 miles) of street running on Oak Avenue. That was a great success, and the line yielded nearly a dozen other great shots. Here is one of my favorites as one of the road's unique Progress Rail PR30Bs (delivered in 2012) approaches the outskirts of Exeter at about MP 261 seen from the Road 281 crossing. A seemingly endless orchard in tidy rows provides perfect complimentary lines at left while it right a long International Paper plant (that is still a customer) dominates the scene in this view looking west. This really captivated the essence of the strikingly rich agricultural country and the only thing that could have made this shot better would be a pair of scarlet and grey GP9s leading the way. Tulare County, California Saturday February 18, 2017

This Business Cards Near Me Now - tulare-dust-and-espee-dreams on net.photos image has 1024x683 pixels (original) and is uploaded to . The image size is 304597 byte. If you have a problem about intellectual property, child pornography or immature images with any of these pictures, please send report email to a webmaster at , to remove it from web.