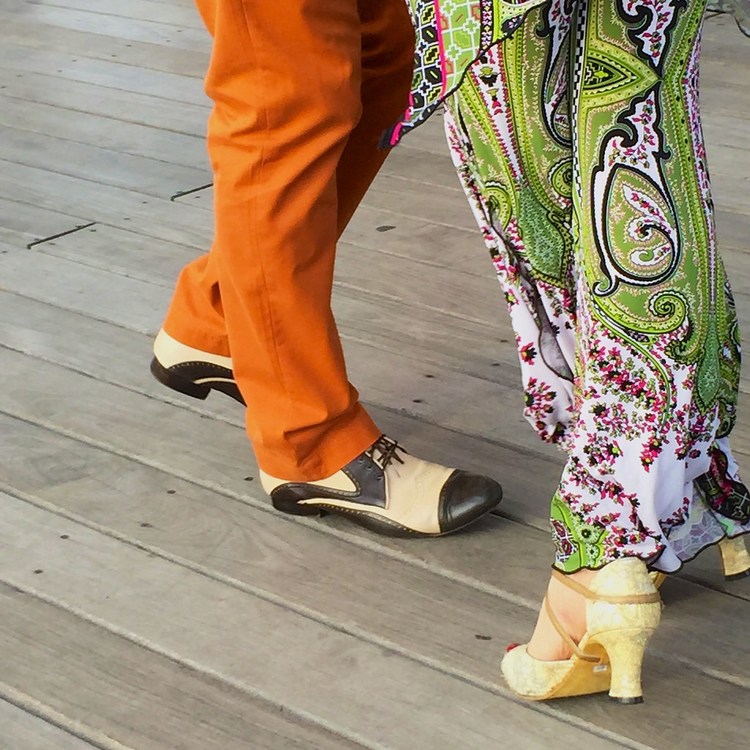 Note: this photo was included in Flickr's "Explored!" list for Jul 10, 2015 -- appearing as $#38 in the list. ******************************* Another year has elapsed since I last photographed the tango dancers gathering on Pier 45 (where Christopher Street runs into the Hudson River in New York City's West Village), on the weekend before Labor Day, late-August 2014. But the sun was shining one weekend in early June of 2015, and I decided to venture down to Greenwich Village once again... As I've mentioned in other Flickr sets, I have now met a few of the dancers at previous tango event over the past several; years, and I used to make a point of introducing myself to some of them, handing out business cards with my Flickr address so that people would be able to find these pictures without too much difficulty. But the dancers have good reason to be more interested in the music, and the movement of their partners, than a guy on the sideline with a camera -- so most of them have simply ignored me… Altogether, I've now taken a dozen sets of tango-related photos, and you can see a thumbnail overview of them in this Flickr collection. And if you'd like to watch some other examples NYC tango dancing, check out Richard Lipkin's Guide to Argentine Tango in New York City. Even though the dancers seem fresh and enthusiastic each time I come down here to Pier 45, I have a definite sense of deja vu: arguably, I’ve seen it all, I’ve photographed it all, I’ve heard all the tango music several times before. So I decided to do something different this time: I took all of the photos with my iPhone6+ camera. I used the “burst mode” feature on the camera-phone, so even though I took some 4,000 separate images, there were only about 400 “bursts,” and the iPhone hardware was kind enough to tell me which one or two images were reasonably sharp in each burst. From that smaller subset, I was eventually able to whittle things down to 50 images that I thought were okay for uploading to Flickr; that’s what you’ll see here. Actually, the reason I was motivated to do all of this was not Flickr, but Instagram: for reasons that I can only assume are a stubborn testament to the “culture” of its community, Instagram insists on a “square” format, rather than the 3:2 or 4:3 aspect ratio favored by most DSLR and point-and-shoot cameras. Even worse, it insists that the photos be uploaded one-at-a-time from a mobile device. Ironically, this last restriction may prove to be too much; I’m uploading the photos to Flickr from my desktop Mac, but I don’t know if I’ll have the patience to upload them individually to Instagram… Aside from that, I’ve concluded that the iPhone6+ is a handy little device for casual, ad hoc photos and videos; but it really doesn’t have the features I’ve come to depend on for the photos I want to publish. I won’t go into all of the technical details; chances are that you either don’t know, or don’t care, about those details. And if you do, chances are that you’ve made up your mind one way or another. As for me, I will definitely keep using the iPhone for some of my photos — especially the ones that really are casual, unplanned, ad hoc photos when I’ve got no other equipment that I can use. But with sophisticated little “pocket cameras” like the Sony RX-100 and Canon G7X, those moments are pretty rare for me … still, it was an interesting experiment. As I've also pointed out in some previous Flickr albums, you can see a video version of the tango dancers from 2011, complete with music (which isn’t really tango music, but that’s okay), on my YouTube page; it’s here: www.youtube.com/watch?v=rqmnTQuwn54&list=UUUXim5Er2O4...

This Business Cards Near Me Now - tango-june-2015-25 on net.photos image has 1024x1024 pixels (original) and is uploaded to . The image size is 251439 byte. If you have a problem about intellectual property, child pornography or immature images with any of these pictures, please send report email to a webmaster at , to remove it from web.