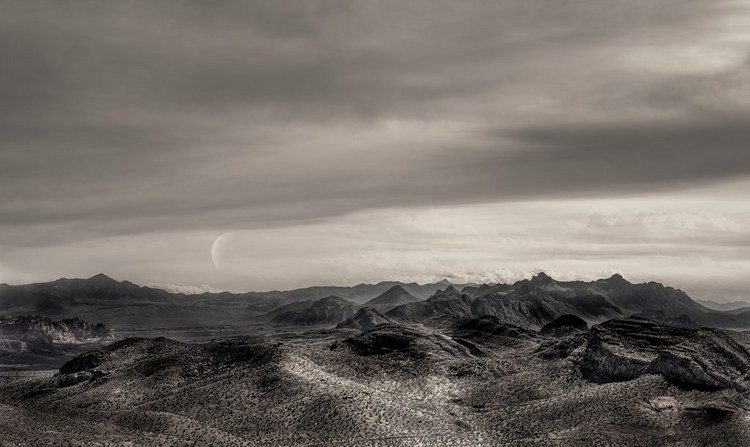 One of my favorite views as I head South on I-15 about 40 miles North of Las Vegas. Over the years I've pulled over to the shoulder to shoot this scene half a dozen times. Most of the time the light or sky aren't working for me. But even then, the view is hard not to admire. Unfortunately it's only viewable as your going down a long fairly steep sweeping curve, so staring while driving isn't a good idea. Fortunately if you've paid attention over the years as I have, I know exactly where there's enough room to pull over and get safely off the road and still have the view. The scene is out there aways, so you need a longish lens to capture the neat stuff and avoid the nearby highway and traffic just out of the frame here. Oh, off subject, this afternoon I noticed somebody transferred $2,200 from my savings to my checking account and then withdrew $2,500! Called my bank and now have the bank fraud department working on it. My debit card is now cancelled and a new card is being sent. Somehow the thief got in far enough to transfer enough money from saving into checking to cover the withdrawal. Looks like I'll be using credit cards until I get home in a few weeks. Covid 19... Well hopefully once we get this behind us we'll have learned enough that when the next bug shows up we'll be better prepared. Can't be shutting down the entire economy like this again. I wonder if it wouldn't have been better to isolate folks that are in the high risk community rather than everyone. Seems like our government has pulled out all the stops in an effort to help people and businesses get through the economic recovery. Even so, the damage from this necessary shutdown is going to be felt for years. The only good thing from where I sit (my trucks seat) is the greatly reduced traffic. Highway speeds through Los Angels, the Bay Area, and Portland today. I like that, but not so much when you think about why there's so few cars traveling. Anyway, hope everyone is being safe, healthy and strong. We'll get through this together my friends. The title Extinction Cycle for this picture is also the title of the book by Nicholas Sandsbury Smith. (7 books in the series) It's a dystopian tale of a military developed virus that changes people infected into monsters. Probably not the best reading while going through a pandemic, but at least most of us are not turning into monsters.

This Business Cards Near Me Now - extinction-cycle- on net.photos image has 1024x610 pixels (original) and is uploaded to . The image size is 124772 byte. If you have a problem about intellectual property, child pornography or immature images with any of these pictures, please send report email to a webmaster at , to remove it from web.