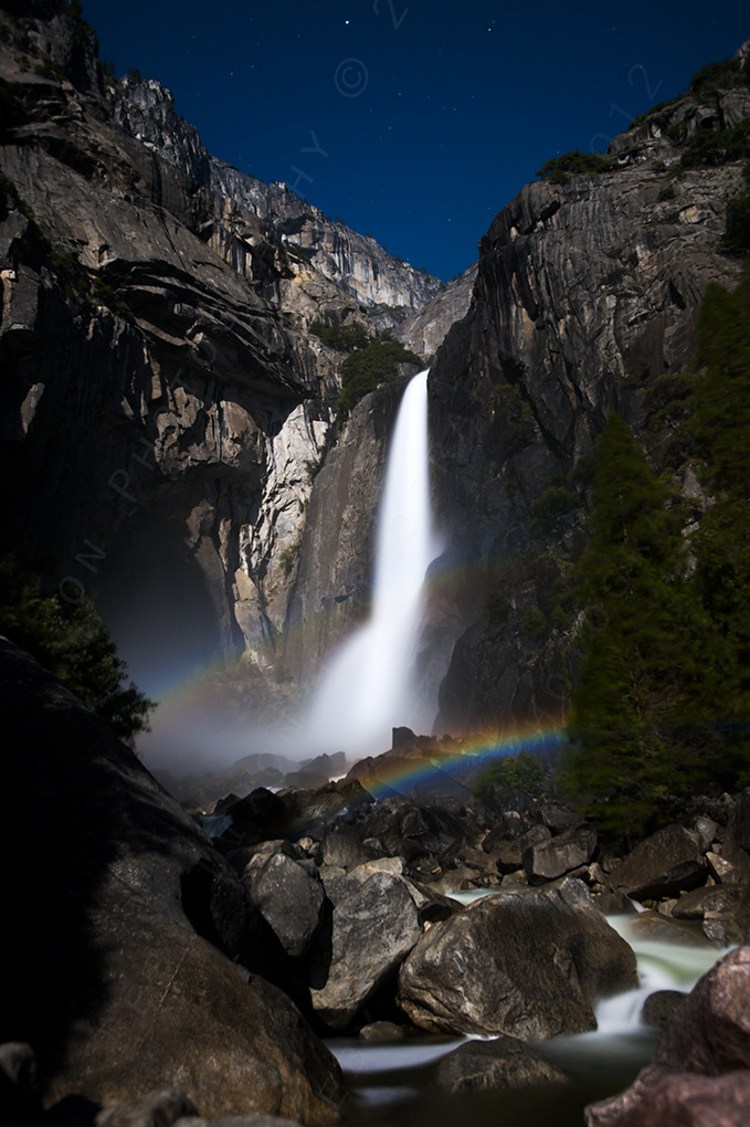 The full moons of April and May are the only ones to produce moon bows over upper and lower Yosemite Falls. I was so lucky to be here both months! Hundreds, or thousands of people showed up Friday and Saturday nights to watch and photograph the moon bows. This was a true event and the air was filled with excitement. What many people didn't know is that the moon bows are barely visible to the naked eye. All that one might see is a white arch, or some slight color, but it is nearly impossible to tell what is there until looking at the photographs. Photos of the upper falls are taken from some of the meadow areas where the falls are visible, or from the trail that leads up to the base of the upper falls. I wanted to hike up for a better view but the water sprays make photography difficult and I decided to keeps things a little more simple. For the lower falls one has to hike up the short trail to the bridge near the base and then step over and between the hundreds of spectators. For the most part people were great and did their best to not to get in anyone's way. One of those feel good California events. I met quite a number of California photographers that I've never seen in the other parks and so my favorite question was to ask if anyone every leaves the state. Their favorite reply was, "Why would we?" The Bay area was well represented on the firing line - Nikon and Canon. And there were a few workshops going on. I collected a lot of business cards and then promptly washed my jeans. So, please say hi if you met me out there. Also, a number of photographers were able to show photos on their iPads, which was much nicer than the small phone screens. My brother sent me his first generation iPad last week and I went home and began making my own portfolio to tout around with me. The poison oak is nearly gone but sure doesn't want to leave. At any rate I have felt one ton better and now know I was feeling pretty out of sorts. Apparently most people are not affected that badly. Anyway, once the itching began to ease off I was able to have fun, finally. Only a few days before that, I'd decided that it would probably be best to leave because there was no joy in being there but it was uplifting to find out that it had less to do with my attitude and more with being worn out. The full moon shooting was some terrific fun! My new volunteer supervisor started last week and it turns out that he is also a photographer but doesn't shoot with a real camera - his is a Canon. What a bummer for him. LOL I maybe shouldn't have begun the conversation by asking him what type of shooter he is. He told me to get a real camera. Some people... The campground is great and I love being a camp host. Finally I get to ask people to keep it quiet without being called any names - not out loud anyway. And they listen! LOL It is all about people getting to choose what they want to listen to, instead of others deciding for them. The new camp hosts are terrific and we all work well together. BTW, I know some of you will grumble about the new watermarks but I am tired of having my images stolen. My photos are not to be used by anyone for any reason! New blog post! wp.me/p1l4HY-ea Like me on Facebook: www.facebook.com/pages/Deby-Dixon-Photography/16390137032...

This Business Cards Near Me Now - double-moon-bow-on-lower-yosemite-falls on net.photos image has 679x1020 pixels (original) and is uploaded to . The image size is 203661 byte. If you have a problem about intellectual property, child pornography or immature images with any of these pictures, please send report email to a webmaster at , to remove it from web.