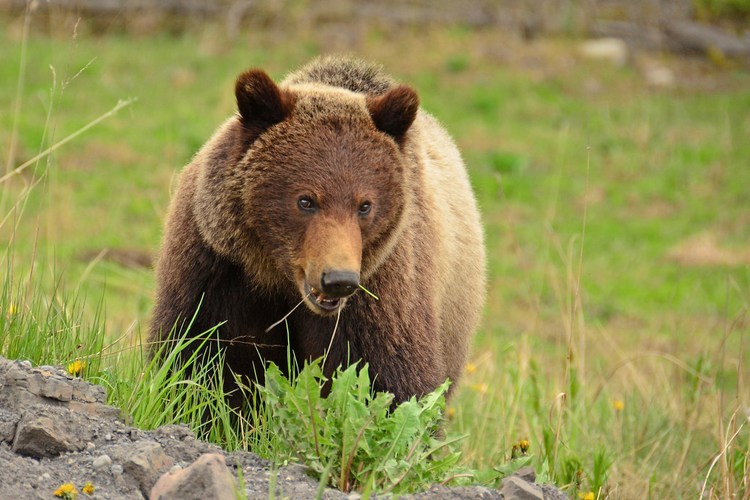 Close Encounters of the Grizzly Kind

I'm going through memory cards and found this old photo from 2012. I'm not sure why but I didn't upload it on flickr at the time. I can remember this encounter like yesterday though. I was driving home from work and saw two grizzly cubs down in a gully, about 50 metres off the road. These cubs were familiar to some of us at work because they were two of the triplets, whose mother had just kicked out to fend for themselves. In fact, the previous few photos on my photostream are of the mother. I stopped to take a few photos but I was in a really awkward spot. The grade on the other side of the road was quite steep and the bears were out of view. I decided to wait, to see where they would go. Then, this head popped up right beside the road. I was more shocked than the bear.... she just kept on eating weeds. I was amazed that she just went about her business, while I was parked right beside her. I managed to lean over the passenger side and got two photos of her with her head up. I've seen this bear every year since 2010, except for 2011. Now, I know this sounds weird, but she has always let me have a few photos before she ambles off. I wonder if her mother let her know it is ok... this guy with a camera really isn't a threat.

This Business Cards Near Me Now - close-encounters-of-the-grizzly-kind on net.photos image has 1024x683 pixels (original) and is uploaded to . The image size is 225647 byte. If you have a problem about intellectual property, child pornography or immature images with any of these pictures, please send report email to a webmaster at , to remove it from web.