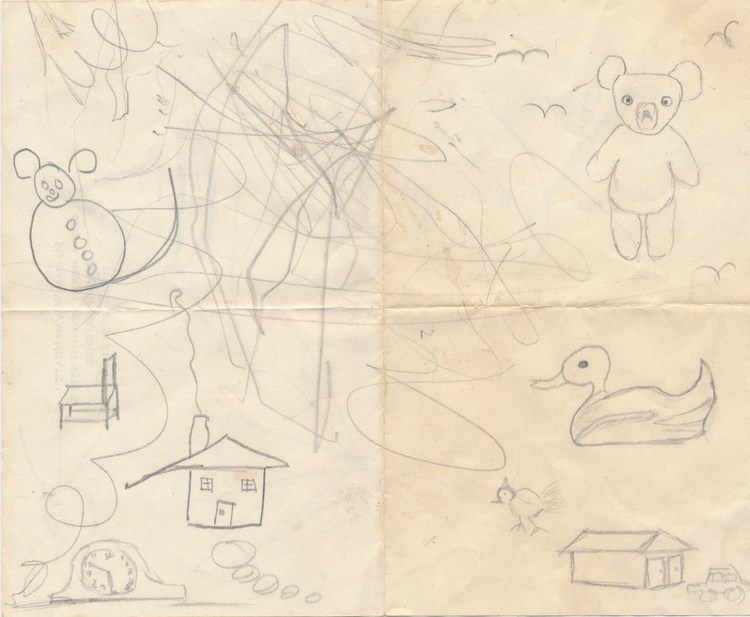 A Piece Of Family Ephemera

I've had this bit of family ephemera floating around my apartment for some months now, slowly making its way towards the back bedroom, where all the family ephemera is supposed to end up, all the booklets and pamphlets and maps and letters (dozens and dozens), and post cards (hundreds) and family photographs (thousands), memoirs, hand-transcribed, taped interviews, Last Wills and Testaments, all that kind of stuff. Mostly it's the women, the mothers and the grandmothers and the great-grandmothers going back, who were the savers, the hoarders, but I guess in my grandfather's case, he the prolific letter-writer and giver-of-sermons, an exception would have to be made. As for me . . . After my mother's death, I gave one of my cousins my grandmother's diaries, and now I want them back, or at least the first one. I'd love to see if I can decipher my Gran's handwriting: it is some of the most difficult-to-read handwriting I've ever seen. I suppose once you've cracked the code, you're in. I imagine the diary will say things like "today I had a soft-boiled egg in an egg cup for breakfast" (the English are big on egg cups). Family ephemera. Someday, it will all get organized, and perhaps reduced in the process to a more manageable volume, this tidal wave of family ephemera. At least, that's what I tell myself. But this one piece of ephemera: I couldn't get unstuck from it. I would shuffle from one room to another, and there it would be, lying on a desk or sitting on top of a dresser. How nice, I thought, that my mother had saved a page of my (very) youthful drawings, my baby steps towards becoming an artist (alas, twas not to be). But still, thanks Mom, at least your heart was in the right place. And then one day I picked up the page of drawings and turned it over to look more closely at the other side. My mother was a great letter writer, and of course these child's scribbles, and her adult's attempt at a helping hand, are written on her letterhead. But though I'm sure I had looked at both sides, not once but several times, I had not focussed, not bothered to notice, the address on the letterhead. I had assumed, in my solipsistic way, that these feeble attempts at art were a joint effort of me and my mother. But then I saw the address: "620 - A NORTH SEVENTH STREET." I was 7-years-old when we moved to North 7th Street. These aren't my scribbles. These are my sister Wendy's. . . . . . . . . . . . . . . . . . . . . . . . . . . . . . . . . . . . . . . . . . . . . . . . . . . . . . . . . . Today is the 60th anniversary of the death of my sister, Wendy Graham Van Noate. When I finally figured out who did the drawings on the letterhead (I really did imagine that I was one of the two artists, for a period of several weeks, until I finally stumbled onto the truth), I was moved to do a bit of research. Wendy's grave is nicely memorialized on Find A Grave. She was born on June 1, 1959, and she died on April 11th, 1961. She was less than two months short of her second birthday. I don't actually have a lot to say about the little page of drawings. My mother's duck is pretty good. There doesn't seem to be a high degree of difficulty in the bear. Wendy seems not quite ready to be out of the scribble stage. What I think of are my mother, sitting there at the breakfast room table, Wendy in her high chair, or perhaps sitting on my mother's lap, the two of them utterly absorbed in the business at hand, each living in the surety of the other's full attention. I can imagine my mother holding this page in her hand, after Wendy was gone, and experiencing a rush of warmth and tenderness inseparable from an almost unbearable sadness. I thought about holding on to this page until Wendy's birthday, writing about it then, but frankly, I remember nothing about the day Wendy was born, and the day she died is like a brand on my wrist. Today, It's been sixty long years since I had my sister Wendy with me. Sixty years ago today I was walking up the alley that ran through the middle of our block and my parents had just pulled into the garage, after a long, what must have been an agonizing drive back from Cleveland, where Wendy died following failed open heart surgery at the Cleveland Clinic. But don't get me wrong: almost two years with Wendy will always be infinitely more valuable than an infinite number of years without her. My mother idolized people. Maybe both sexes, I don't know. FDR, Churchill, Alaister Cooke, the guy from Cleveland who sailed the dingy across The Atlantic----they all got the treatment. I was either the sainted son or the distinctly feet-made-of-clay fallen idol. Had Wendy gotten older, started school, wanted to learn to play the violin, entered puberty, gone off to college, smoked pot, gotten married, had children, won that city council race, inevitably, had Wendy become Wendy, there would have come a day when she disappointed my mother. Perhaps, when that day came, as it inevitably would have, my mother could have gone and held this page of drawings in her hands, and remembered. Family ephemera

This Business Cards Near Me Now - a-piece-of-family-ephemera on net.photos image has 1024x842 pixels (original) and is uploaded to . The image size is 134513 byte. If you have a problem about intellectual property, child pornography or immature images with any of these pictures, please send report email to a webmaster at , to remove it from web.