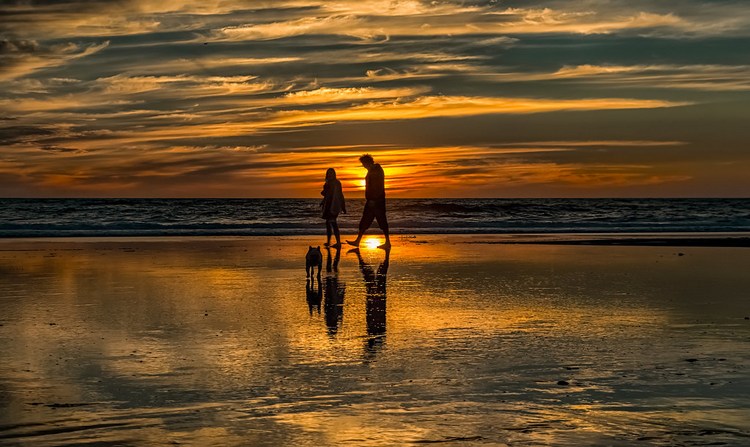 I shot this back in mid November on my first day of beach shooting following the dog's surgery. I had stayed home in lieu of chasing sunsets and reflections to monitor his health and shoot portraits of him as he recovered but finally on an interesting cloudy day, I decided to head to Venice to shake off the rust. What I got when I arrived was a very saturated, golden sky paired with an extremely low tide...the kind of conditions I always want when here. As usual, I got to my normal spot very close to sundown and within a few minutes, the sun had lowered dramatically over the horizon. I set up quickly and as I prepared to shoot, noticed a couple out of the corner of my eye strolling slowly over the reflective surface while their bouncy Boston Terrier streaked back and forth on the shore. While I generally avoid people when I shoot, a carefree dog running towards me and my gear will never bother me. I wish I had more time to get prepared for them to enter the frame because I would've loved to get them a bit lighter and with more detail but at least I had enough time to focus on where they'd end up and fire off a few shots before they passed the sun. The next shot i took had the dog about 3ft from me and then I stopped for a minute to play with him. The parents seemed a bit oblivious and didn't call after him even though I certainly didn't mind the distraction and they continued to wander down the beach while their dog ran from stranger to stranger. Venice is about as dog friendly as any beach I've been to, even if they are prohibited from being on it. I think I've seen at least 1 dog running around between me and the waves on every trip I've been to here other than the times when it's rained. Even a few years ago, all I had to do was say "do you want to?" to Scotch or pick up a towel and he'd tilt his head to the side and bounce around knowing we were going to the Potomac River to swim. Sometimes I'd be going into the shower and if he saw a towel in my hand, he'd freak out until I took him to the river, even if it wasn't for hours. 2 weeks prior to this photo, Scotch was basically on his deathbed and even while shooting, I wondered if he'd ever recover enough to enjoy some of the activities we used to do most often. After 16 trips to the vet in 12 months and a major surgery, it had become quite the struggle to even convince him to get in my car for a drive--and I certainly can't blame him for that. About 2 weeks ago, I grabbed all my camera gear and a towel and waved for him to come with me right after we got back from our afternoon walk. My plan was to take him back to Malibu which is where he first saw the Pacific Ocean a year ago and relax with him on the beach while I shot a sunset. Back in Maryland it was never hard to get him to join me on a roadtrip to take photos and all it took was a "wanna go for a car ride?" and he would be ready. He can no longer hear the words "swimming" or "car ride" but he definitely recognized the camera gear and towel and never hesitated going in. I ended up leaving the camera in the car and instead let him off the leash so he could run along the damp shoreline and chase seagulls. He didn't swim--something he's never supposed to do again--but he had an amazing time so we returned a few times over the next week. It's winter now in LA with cold temps, high winds and plenty of rain but since he isn't swimming, it's a perfect excuse to bring him to the empty beaches to get some real exercise and enjoy life as much as he can. One of these days I'll drag my brother along so I can actually photograph Scotch and the sunset and not worry about my deaf bird dog wandering off. On the day of this shot back in November, I saw this dog way more than I saw the owners and it's hard not to smile when you see a dog who's happy and carefree. Also...it's hard not to smile when you're standing in the middle of a golden reflection with great weather in Southern California. LOCATION: Venice Beach Venice, California November 15th, 2016 SETTINGS: 35mm ISO 100 f/6.3 1/50th second CPL

This Beaches Near Me Pet Friendly - -free-range-parenting- on net.photos image has 1023x610 pixels (original) and is uploaded to . The image size is 209147 byte. If you have a problem about intellectual property, child pornography or immature images with any of these pictures, please send report email to a webmaster at , to remove it from web.