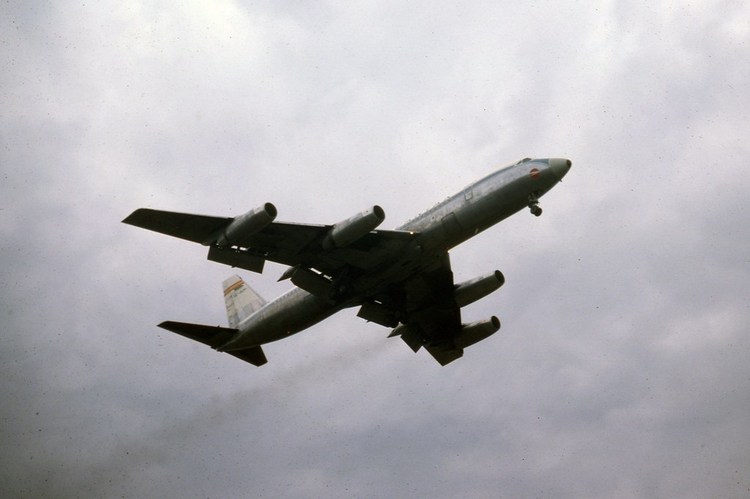 Gatwick Memories One of the wonderfully 'retro' Convair Coronados that Spantax used well into the 1980s - seen about to land on runway 26 at Gatwick. Note the smoke - it's a shame I haven't got the audio :) Thanks to Spantax, I ended up seeing a third (12) of all CV-990 Coronados built (37) :) EC-BZP c/n 18 Convair CV-990-30A-5 was delivered new to American Airlines as N5608 in Mar 1962, and flew with the airline until 1969. For the next three years, the aircraft became OD-AFF - one of six that flew with MEA Middle East Airlines. Returned to American Airlines as N6844 in a trade with a Boeing 720B, the aircraft then became EC-BZP with Spantax - one of 13 that the airline operated in the 1970s-80s. It lasted in service until 1984 before being withdrawn at Palma de Mallorca. It was flown to at Barcelona-Sabadell where it was stored for some time before it was finally broken up. Convair CV-990 Coronado - produced by the Convair division of General Dynamics, a stretched version of its earlier Convair 880 produced in response to a request from American Airlines. The 990 was lengthened by 10 ft (3.0 m), which increased the number of passengers from between 88 and 110 in the 880 to between 96 and 121 in the 990. This was still fewer passengers than the contemporary Boeing 707 (110 to 189) or Douglas DC-8 (105 to 173), although the 990 was 25–35 mph (40–56 km/h) faster than either in cruise. American Airlines asked Convair to design an aircraft for coast-to-coast flights, able to fly non-stop from New York City to Los Angeles against the wind. They wanted a somewhat-larger passenger capacity than the 880, which was the smallest of the first-generation U.S. jet airliners. The 990 began flight testing on January 24, 1961. Only 37 CV-990s were built, making it a rare type to see. American Airlines began to dispose of its CV-990s in 1967. Swissair bought eight CV-990s beginning in 1962, operating them on long-distance routes to South America, West Africa, the Middle and Far East, as well as on European routes with heavy traffic. Their fleet was withdrawn from service in 1975. Scandinavian Airlines (SAS) also operated Coronados on their long-haul schedules to Tokyo and other destinations in the Far East. When the major airlines retired their Convair 990s, they found a second life on charter airlines. Spantax of Spain had a large fleet until the late 1980s, as did Denver Ports of Call. In 1967, Alaska Airlines purchased Convair 990 PP-VJE from Varig, and operated it as N987AS in scheduled airline service until 1975. More info here: en.wikipedia.org/wiki/Convair_990_Coronado This photo is one of my earlier slides, as I only fully switched from the old Instamatic in 1978! One of a small number of slides taken by me in 1977-78, before I purchased my first SLR camera - a Zenith E. Slides that were nearly lost to oblivion No.16 The original slide / transparency was rescued from a box of 'dud' slides that I could never quite bring myself to throw away - now I am glad that I kept them. ;) From an original slide, scanned and unrestored. You can see a random selection of my aviation memories here: www.flickriver.com/photos/heathrowjunkie/random/

This Barcelona Schedule - ec-bzp-spantax-convair-cv-990-coronado-on-short-finals-to-runway-26-at-london-gatwick on net.photos image has 1023x681 pixels (original) and is uploaded to . The image size is 83261 byte. If you have a problem about intellectual property, child pornography or immature images with any of these pictures, please send report email to a webmaster at , to remove it from web.