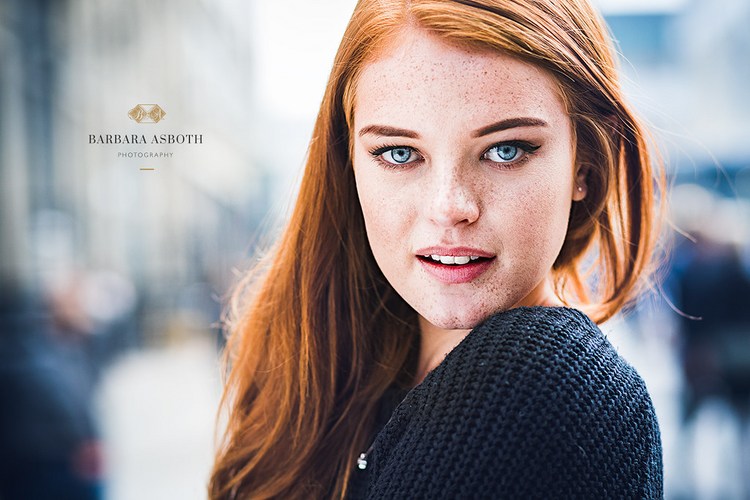 Find me on: Facebook | Instagram | Website & Photo blog Find out more about this project and see pictures taken by other photographers at the 100 Strangers Flickr Group page ------------------------------- This is Abbey (I hope that's the correct spelling) who I spotted in Shoreditch as she walked by with her boyfriend. I was with a group of fellow photographers who came to the 100S meetup, chilling outside a bar with drinks. She had a striking yet approachable aura about her which made me go for it. Sometimes you see beautiful women who give off a distant air, but not Abbey, who was warm and chatty throughout. There was some nice backlight but no suitable backgrounds otherwise, so we took some shots using the light and a white reflector that Arnab kindly held in place, below and to the left of Abbey's face. I coached Abbey into two or three different poses, as I am working on including more movement and poses into my street portraits, trying to veer away from the simple headshot style that I'm a bit too comfortable with now (got to challenge yourself!). This ties in with my women's portraiture work outside this project, as that also requires lots of posing knowledge. In this instance, I directed Abbey to rotate her body away from me slightly and push her chin forward and down, back towards the camera. Then I asked her to connect her shoulder with her chin more; the shoulder shouldn't be touching the chin in this way, but I thought Abbey's expression was the best in this shot, so despite the shoulder issue I chose to feature this one. But if you try this pose, do watch out to leave a gap between the chin and shoulder :) Abbey is a law student in her final year, and has done modeling before but plans to stop soon as her exams are coming up and she plans to focus on her law career now that she's close to graduating. Abbey's favourite feature is her hair, and when I asked what makes her happy, she pointed to her boyfriend with a cute smile (he was oblivious to our conversation and was texting on his phone, waiting patiently for us to finish). They seemed like a sweet couple and I wished them happiness for the future as I said goodbye, so as not to keep Abbey's boyfriend waiting too long. Thank you Abbey, it was a pleasure to meet you! :)

This Backgrounds For Phones Cute - abbey-stranger-103-200-shoreditch-london on net.photos image has 1024x683 pixels (original) and is uploaded to . The image size is 191062 byte. If you have a problem about intellectual property, child pornography or immature images with any of these pictures, please send report email to a webmaster at , to remove it from web.