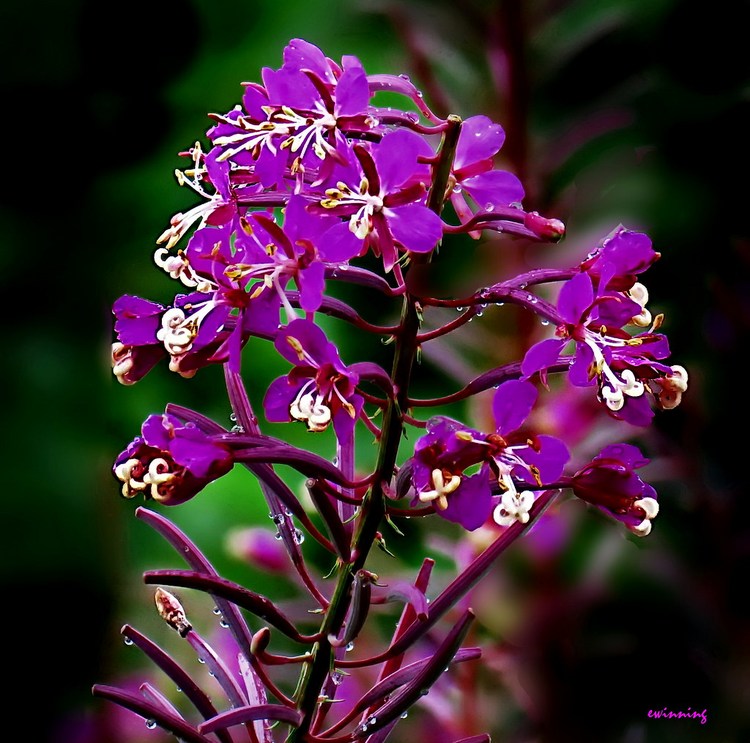 When we were in Washington state in 2013, if you had asked me to name the state flower of Washington, I would have said that it had to be Fireweed. We saw it all over, especially on the sides of roads where they were just "allowed" to take root and grow. The days we stopped to get shots of the flowers, it had just rained. That helped ... and hindered. The Fireweed is another plant with flowers that are ill-defined except for the stamen (the curled white things). No way I was going to get this with a dark background, but I'm fairly good with exposures (in the field) which will blur the background. And, that's what you see here. Chamaenerion angustifolium is a perennial herbaceous flowering plant in the willowherb family Onagraceae. It is known in North America as fireweed, in some parts of Canada as great willowherb, in Britain and Ireland as rosebay willowherb. In the United Kingdom it is also known as bombweed, as a result of its rapid appearance on city bomb sites during the Blitz of World War II.  It is also known by the synonyms Chamerion angustifolium and Epilobium angustifolium. It is native throughout the temperate Northern Hemisphere, including large parts of the boreal forests.

This Background Synonym - fireweed-narrow-leaf-fireweed-willow-herb-rosebay-willow-herb-blooming-sally-1136 on net.photos image has 1024x1015 pixels (original) and is uploaded to . The image size is 243953 byte. If you have a problem about intellectual property, child pornography or immature images with any of these pictures, please send report email to a webmaster at , to remove it from web.