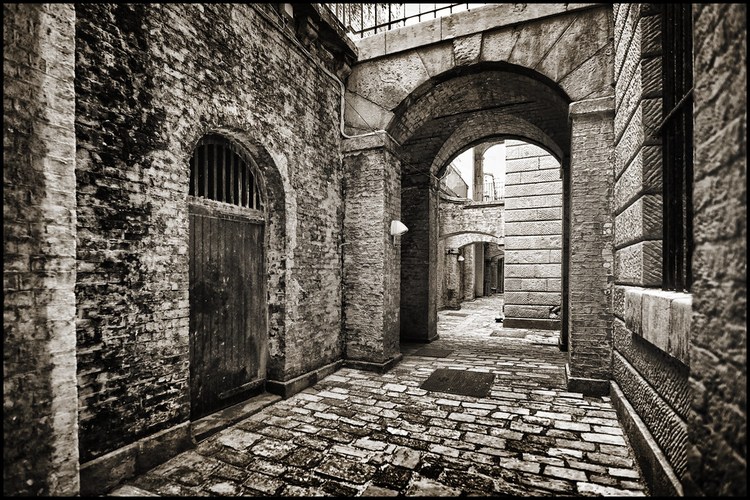 The free 'Historical Highlights' tour of Somerset House gets you into all sorts of areas where you can't normally get. This is actually down in the lightwell that runs around the perimeter of the central courtyard. It's quite atmospheric (enhanced by a moody monochrome conversion) and has apparently been used by film companies previously to double as 'ye olde' London streets. You can find more info on the tours here : www.somersethouse.org.uk/whats-on/historical-highlights-tour From Wikipedia : "Sir William Chambers, Surveyor-General of Works was appointed at a salary of £2,000 p.a. to design and build the new Somerset House. He spent the last two decades of his life, beginning in 1775, in several phases of building at the present Somerset House. Thomas Telford, then a stonemason, but later an eminent civil engineer, was among those who worked on its construction. One of Chambers's most famous pupils, Thomas Hardwick Jr, helped build parts of the building during his period of training and later wrote a short biography of Chambers. By 1780 the North Wing, fronting the Strand, was complete; its design was based on Inigo Jones's drawings for the riverfront of the former building. Construction of the riverside wing followed; it was completed in 1786 and the East and West wings were occupied from 1788. It is not certain at what pace the rest of the construction progressed, but it is clear that the outbreak of war with France caused delays through lack of money. Chambers died in 1796, whereupon James Wyatt took over as architect. By 1801 the building was deemed to be complete, but there are indications that as late as 1819 some decorative work still needed to be completed. The building (which did not yet include the "New Wing" and King's College London, situated behind the West and East Wings of the quadrangle respectively) cost £462,323. At that time of construction, the river was not embanked and the Thames lapped the South Wing where three great arches allowed boats and barges to penetrate to landing places within the building." My Website : Twitter : Facebook : Instagram : Photocrowd © D.Godliman

This Architecture Salary - uk-london-somerset-house-historical-highlights-tour-01_sepia_dsc4066 on net.photos image has 1024x683 pixels (original) and is uploaded to . The image size is 361803 byte. If you have a problem about intellectual property, child pornography or immature images with any of these pictures, please send report email to a webmaster at , to remove it from web.