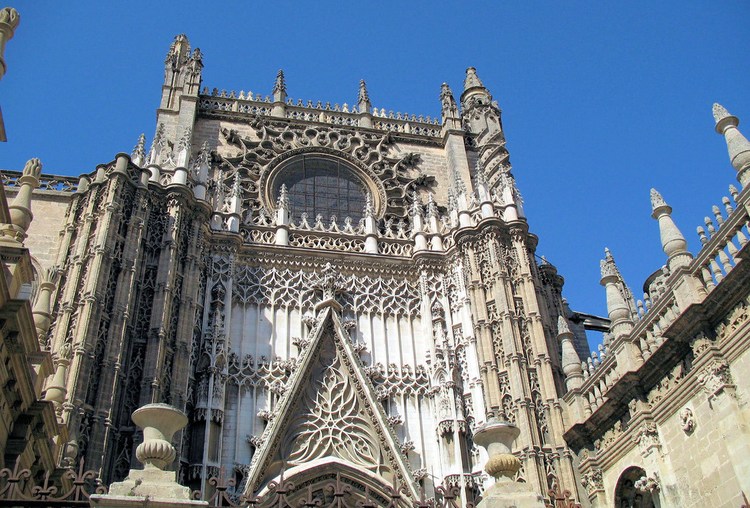 The Cathedral of Saint Mary of the See (Spanish: Catedral de Santa María de la Sede), better known as Seville Cathedral, is a Roman Catholic cathedral in Seville (Andalusia, Spain). It is the largest Gothic cathedral and the third-largest church in the world. After its completion in the early 16th century, Seville Cathedral supplanted Hagia Sophia as the largest cathedral in the world, a title the Byzantine church had held for nearly a thousand years. The cathedral also serves as the burial site of Christopher Columbus. The Archbishop's Palace is located on the northeastern side of the cathedral. The cathedral was built to demonstrate Seville's wealth, as it had become a major trading center in the years after the Reconquista in 1248. In July 1401 it was decided to build a new temple, as the ancient Muslim mosque was in bad shape after a 1356 earthquake. According to the oral tradition of Seville, the decision of members of the chapter was: "Let a church so beautiful and so great that those who see it built will think we were mad". According to the minutes of that day, the new church should be: "a work such as good, which like no other." Construction began in 1402; it continued until 1506. Church workers gave half their salaries to pay for architects, builders and other expenses.

This Architecture Salary - seville-catedral- on net.photos image has 1024x694 pixels (original) and is uploaded to . The image size is 330225 byte. If you have a problem about intellectual property, child pornography or immature images with any of these pictures, please send report email to a webmaster at , to remove it from web.