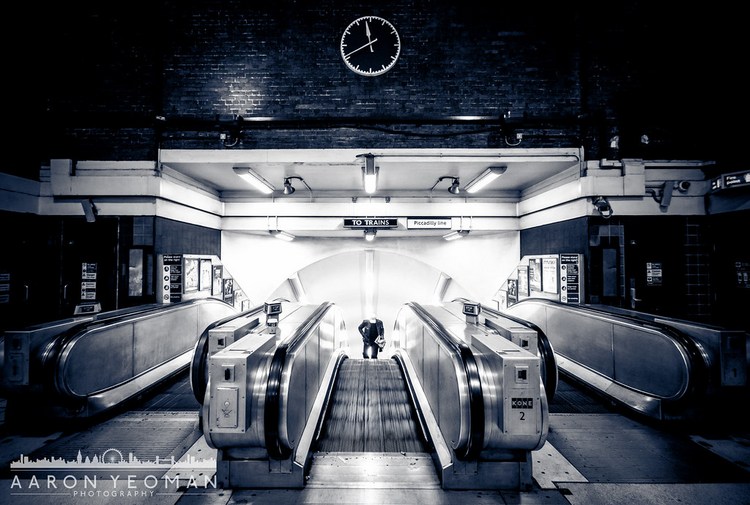 My Website - Aaron Yeoman Photography Also Follow Me at 500px * Getty Images * Twitter * Facebook * Google+ Wood Green Underground Station, London, England UPDATE DECEMBER 2012 - #10 on Explore for 05.12.2012 - thank you very much everybody! :-) This was taken at Wood Green Underground station at the ticket hall. Both Daniel Borg and I had never visited this station for photography before, its always great to visit a new place. The ticket hall is stunning, in an art deco style as are many others are on the the Northern part of the Piccadilly Line. We suspected that this station was very busy so getting images without people in was going to be difficult but we persevered. I got a few images that had no people in but managed to get this one as this chap walks up the escalator which I felt captured the human element so decided to use it. We had a bit of interesting experience here when Dan was taking his image, a passenger spotted our cameras and had a go about taking photos and threatened to 'kill' Dan, I have never come across this before but he left with no problem in the end, has anyone else had similar issues with other people when taking your images? This image was a little but awkward to get post processed. I tried striaghting out the canopy part in Lightroom as it was slightly out however when I did that the top of the escaltor (the bottom of the image) was not straight. If I corrected this part of the image then the canopy was not straight. This indicates to me that I was not quite square on when taking the images however this proved difficult when you have people barging you out the way when coming up and down the escalators. In the end I compromised and felt that most of the image was correct if I straightened the canopy, you may not even notice it. :-) Oh on another note I was sorting out all of my Underground images in Lightroom and I calculated that I have only visited for photography about 11% of the Underground Network, just a useless statistic there but I have got a long way to go ;-). Photo Details Sony Alpha SLT-A77 Sigma 10-20mm 1:4-5.6 EX DC HSM RAW f/8 10mm ISO400 1/10s exposure Software Used Lightroom 4.2 PTLens Information Wood Green is a London Underground station on the Piccadilly Line. The station is between Turnpike Lane and Bounds Green stations and is in Travelcard Zone 3. It is located at junction of Wood Green High Road and Lordship Lane. It serves Wood Green Shopping City and the nearby Haringey Council administrative complex as well as a densely populated residential area. The station opened on 19 September 1932 when the first section of the Cockfosters extension from Finsbury Park was opened. Like all stations on the extension, Wood Green set new aesthetic standards, not previously seen on London's Underground. When the Cockfosters extension was planned, alternative names for this station—"Lordship Lane" and "Wood Green Central"—were considered, but rejected. Architecturally, this station, designed by Charles Holden, is a well-preserved example of the modernist house style Holden developed for London Transport in the 1930s. Located on a corner site, the main frontage is curved and is flanked by two ventilation towers, although these are later additions to the station. On the northern side, the structure also incorporates a shop which forms part of the parade in High Road. The other end of the parade features a large London Underground sub-station. From July 2011, the station is a grade II listed building, which now means every station building between Turnpike Lane and Cockfosters is listed. The below surface areas of the station are tiled in biscuit-coloured tiles lined with green friezes. The station tunnels—in common with those of Manor House and Turnpike Lane—are 23 ft (7 m) diameter and were designed for the greater volume of traffic expected. In contrast, the platform tunnels at both Bounds Green and Southgate have a diameter of only 21 ft (6.4 m). The construction of "suicide pits" between the rails was a new innovation. To the north of the station is a reversing siding. This was used for reversing northbound trains so that they could return back towards central London and Hounslow or Uxbridge. Until the 1990s trains were regularly turned back here - trains now only reverse at Wood Green in times of service disruption, or to regain time after late running. On 16 March 1976, the station was the site of a Provisional IRA bombing, when a device exploded on an empty train as it prepared to enter the reversing siding, before heading west to pick up football supporters at Arsenal. One passenger standing on the platform was injured by flying glass. The National Rail station now called Alexandra Palace was formerly called Wood Green; it was renamed in 1984. en.wikipedia.org/wiki/Wood_Green_tube_station

This Architecture Design Software Example - by-oneself-explored- on net.photos image has 1024x690 pixels (original) and is uploaded to . The image size is 205340 byte. If you have a problem about intellectual property, child pornography or immature images with any of these pictures, please send report email to a webmaster at , to remove it from web.