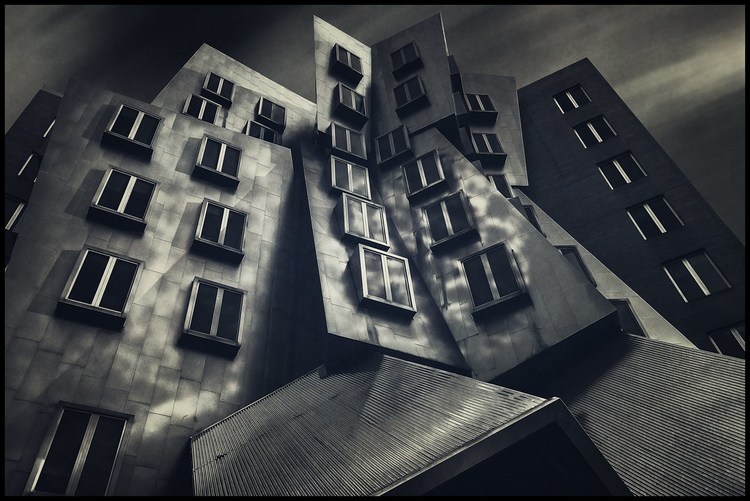 The Ray and Maria Stata Center (/steɪtə/ STAH-ta) or Building 32 is a 720,000-square-foot (67,000 m2) academic complex designed by Pritzker Prize-winning architect Frank Gehry for the Massachusetts Institute of Technology (MIT). The building opened for initial occupancy on March 16, 2004. It sits on the site of MIT's former Building 20, which had housed the historic Radiation Laboratory, in Cambridge, Massachusetts. The building's address is 32 Vassar Street. In contrast to the MIT custom of referring to buildings by their numbers rather than their official names, the complex is usually referred to as "Stata" or "the Stata Center" (though the building number is still essential in identifying rooms at MIT). Above the fourth floor, the building splits into two distinct structures: the Gates Tower and the Dreyfoos Tower, often called "G Tower" and "D Tower" respectively. The building has a number of small auditoriums and classrooms used by the Electrical Engineering and Computer Science department (EECS, Course 6), as well as other departments and on-campus groups. Research labs and offices of the Computer Science and Artificial Intelligence Laboratory (CSAIL), the Laboratory for Information and Decision Systems (LIDS), as well as the Department of Linguistics and Philosophy (Course 24) occupy the upper floors. Academic celebrities such as Noam Chomsky and Ron Rivest, World Wide Web Consortium founder Tim Berners-Lee, and free software movement founder Richard Stallman also have offices in the building. A wide main passage running the length of the building on the ground floor is called the Charles M. Vest Student Street, in honor of the former MIT president who died in December 2013. The Student Street is often used as a more-spacious substitute or extension for the Memorial Lobby located in Building 10 on the Infinite Corridor. The monthly "Choose to Re-use" community recycling swap fest, and a weekly fresh produce market are other events regularly held in the Stata Center. One of five MIT Technology Childcare Centers (TCC) is located at the western end of the ground floor. The Forbes Family Cafe is located at the eastern end, and serves coffee and lunch to the public during office hours. The MIT Museum maintains some historic displays on the ground floor of the Stata Center. A few selected larger relics of past hacks (student pranks) are now on semi-permanent display, including a "fire hose" drinking fountain, a giant slide rule, and full-size replicas of a cow and a police car which had been placed atop the Great Dome (though not at the same time). In the ground floor elevator lobby of the Dreyfoos Tower are located a large time capsule box plus informational panels describing MIT's historic Building 20, which the Stata Center has replaced. Major funding for the Stata Center was provided by Ray Stata (MIT class of 1957) and Maria Stata. Other major funders included Bill Gates, Alexander W. Dreyfoos, Jr. (MIT class of 1954), Charles Thomas "E.B." Pritchard Hintze (an MIT graduate, and of JD Edwards, now Oracle Corporation), Morris Chang of TSMC. and Michael Dertouzos. [Source: en.wikipedia.org/wiki/Ray_and_Maria_Stata_Center]

This Architecture Design In Software Engineering - ray-and-maria-stata-center-at-mit-cambridge-ma- on net.photos image has 1023x683 pixels (original) and is uploaded to . The image size is 195541 byte. If you have a problem about intellectual property, child pornography or immature images with any of these pictures, please send report email to a webmaster at , to remove it from web.