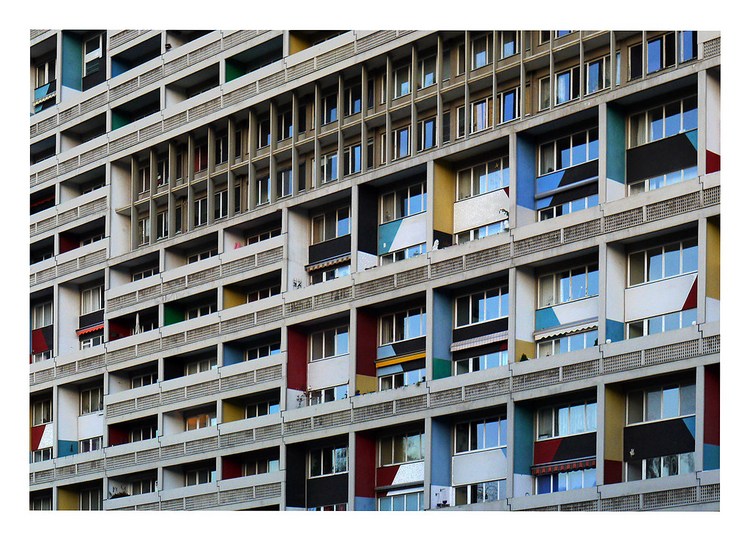 The battle of the Modulor (Corbusierhaus Berlin)

Europe. Germany, Berlin, Charlottenburg, Unité d'habitation. Cobusierhaus, Le Corbusier, (slightly cut) Modernist architect Le Corbusier (Charles-Édouard Jeanneret) created 5 Unités de Habitation. The Unité, the ‘machine for living’, the vertical city, is legendary and set standards for the modernist high rise. Le Corbusier is in a more general sense considered to be the most influential modernist architect. The 5 guiding rules for his architecture were: a. Pilotis - The structure is placed on pillars, through that ground floor is freed up. It can be left open or used for communal space. b. Plan libre - The free design of the ground plan: the absence of structural supporting walls made possible by a grid of reinforced concrete columns c. Façade libre - Separating the exterior of the building from its structural function, it sets the façade free from structural constraints. d. Fenêtre en bandeau - The ribbon Window and e. Toit terras - Roof garden. The proportions he used were based on the Modulor ( a scale of proportions with the height of a man and the golden section at its source). The aim of the Unité de habitation, In Le Corbusier's own words, is to "provide with silence and solitude before the sun, space and greenery, a dwelling which will be the perfect receptacle for the family, to set up, in God's good nature, under the sky and in the sun, a magisterial work of architecture, the product of rigour, grandeur, nobility, happiness and elegance". So he was a little bit full of himself. During the second world war, Le Corbusier revealed his fascist leanings: he proofed to be a convinced anti-Semite and worked as an urbanist for the Nazi-collaborating Vichy regime. This was kept covered as not to tarnish his reputation but was later uncovered in a biography. The original Unité is in Marseille and 3 of the others are in France. And one is in Germany. They all share the same basic philosophy and design. The French ones don’t differ much from the original. The German one in Berlin (1958) does that a bit more. The reason was that during construction the rules were changed by the Berlin project developer and the municipality. As a consequence, some building parts could not be realized and the floor height was raised from 2,26 to 2,50 meter. That was a major problem for Le C: it would have violated the golden section proportion of the apartments, which is one of the roots of his Modulor system of proportions. The result of the ensuing discourse was that the apartments were lengthened (as a consequence the whole building). Another result was that Le C eventually washed his hand of the project and the design of the interior was handled by the Berlin project developer and builder. It's by the way comparable what Niemeyer did during the construction of the Copan building here . "The 530 apartments of the Corbisierhaus are mostly double-storey flats. The entrances are located on 10 corridors named “internal streets”. The house was built within just 18 months, all structural elements being produced on the spot. In addition a specific landscaping concept was designed to create a green belt. With its 53 meters in height, 141 meters in length and 23 meters in width, the house nowadays rises between large trees, its colourful verandas visible from the distance. On the groundfloor are little shops, and a communal laundrette. In 1995 it was declared a protected monument." Corbusierhaus-berlin.org. Short documentaries (in German) about the building are here, here and here. A short animation about the construction logic is here. The Corbusierhaus was, by the way, part of the Interbau 57 exposition Other houses (all in the Hansaviertel) are here, here , here and here.

This Architecture Design Collaborative - the-battle-of-the-modulor-corbusierhaus-berlin- on net.photos image has 1024x739 pixels (original) and is uploaded to . The image size is 364758 byte. If you have a problem about intellectual property, child pornography or immature images with any of these pictures, please send report email to a webmaster at , to remove it from web.