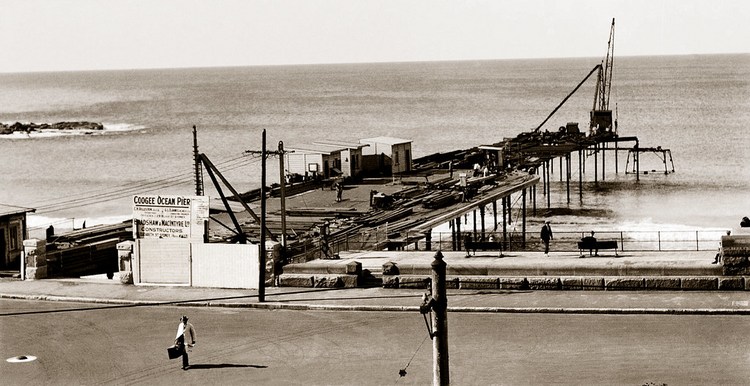 FULL ZOOM VIEWER drive.google.com/file/d/0BxEdtYPaohtbZ3Q4SktjR3F4bE0/view... ******************************* IMAGE INFO - The photographer's viewpoint is looking east from an elevated vantage point on the southwest corner of the intersection of Beach Street & Belmore Road (later Coogee Bay Road). - I have dated this image as 21 Jun 1927, based on the almost exact same photo (taken at the same time) appearing on page 20 of the Sydney "Sun" newspaper. For some reason the scan copy held by the National Library of Australia has a completely erroneous date of 1909! - The construction has reached the start of the central broader circular area where the bandstand is to be first erected (it was later moved to the pier-head to compensate for all the pier-head attractions that were scrapped due to financing issues). - Coogee Ocean Pier Co. Ltd. had been granted a 28 year lease to construct the Pier. Initial plans showed it extending a colossal 935' (285 meters) into Coogee Bay. The pier was to have a capacity to hold 21,000 people, with the massive pier head to contain a full size 1,400 seat theater, 600 dancer ballroom, first class restaurant, plus numerous shops & arcades. However, owing to a rapid funding crisis, the project eventually was only completed out to 590' (180 meters) in length - a long way short of the original plan. Even worse, all the pier head attractions mentioned above were also scrapped. - To add to the developers financing headaches, unlike the calmer waters at Brighton, the incessant pounding, powerful surf that regularly smashed into the pier with every south-easterly "blow" were unrelenting. By as far back as January 1930, the developers had already sunk £78,300 into the project - a staggering $7,000,000 in todays money. Unsurprisingly, they never made any profit during the short life of the project. The Coogee Oceanic Pier Co. went into liquidation in May 1932, with the semi-complete loss-making Pier passing into the hands of Randwick Council by default. - The Pier was immediately closed to the public following the collapse of the Company, while Council officers & engineers inspected the Pier for costings on urgently needed repairs to continue with the amusement business. - However, Randwick Council soon found it would be totally un-economical for them to resurrect the Pier as a going concern (with repairs alone estimated at £4,000 in May 1933 (over $480,00 today). Unsurprisingly then, with mounting financial losses over the period 1932-1933 the by-now-derelict pier remains were sold off for Demolition by Council for a relatively paltry £2,800 (around $230,000 today). - The "Coogee Oceanic Pier" was finally consigned to history & demolished during the period December 1933-March 1934, with a massive storm & huge waves on 2 Feb 1934 causing damage & mayhem for the demolition crew during the process. Perhaps the final say by Mother Nature herself! **************************** SOURCE INFO - 1 negative : glass, b&w ; 8.3 x 10.8 cm from the Fairfax Archive held by the National Library of Australia. - The original was digitized by the NLA & is available from here - nla.gov.au/nla.obj-162491379/view ****************************** CREDITS - Fairfax Archive for the original glass negative. - National Library of Australia for their valuable work in digitizing, archiving & making available online this rare historical content. ****************************** COPYRIGHT STATUS - Per NLA dvice: Out of copyright: created before 1955. Copyright status was determined using the following information: Material type: Photograph Published status: Unpublished Government copyright ownership: No Government Copyright Ownership. - Regarding my own work in creating this unique, cropped, restored & duo-toned version from the copy of the digitized original, I have applied "Attribution-Non-Commercial-Share Alike". ******************************* PROCESS INFO - I made a suitably sized, cropped screen capture of the digitized original in 2 parts to retain decent resolution (which was badly faded with unwanted studio markings). - Using Microsoft Image Composite Editor (ICE) I stitched the two parts seamlessly together. - Using Adobe Photoshop Creative Suite 8.0, I enlarged the resulting single image by 54%, adjusted some areas of uneven exposure, restored contrast & sharpness, removed unwanted artifacts & used a dark sepia duo-tone curve for better tonal range.

This Adobe Photoshop Online Work - 21-june-1927-view-of-coogee-pier-sydney-new-south-wales-australia-restored-version- on net.photos image has 1023x527 pixels (original) and is uploaded to . The image size is 185472 byte. If you have a problem about intellectual property, child pornography or immature images with any of these pictures, please send report email to a webmaster at , to remove it from web.