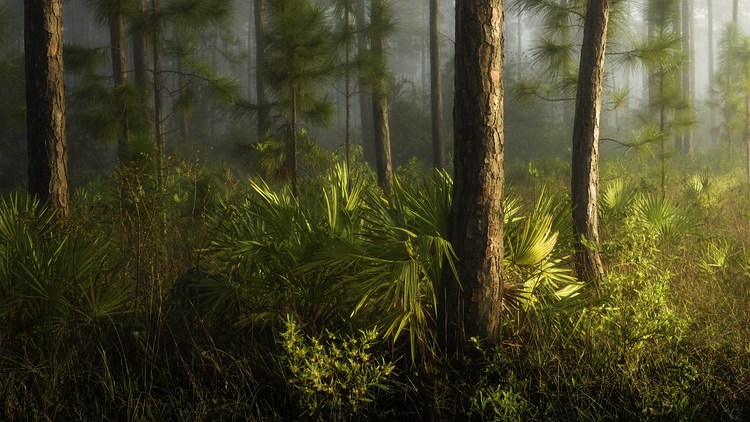 Morning sunrise at Long Pine Key in the Everglades National Park on a foggy morning in January. This is a very special image for me. (beware, long post) Not knowing it at the time of capture, but it became as such afterwards, and even more so years later. I had just purchased this camera (a Nikon D7100) a few days before Christmas 2015, after 4 years (on and off) using a very old (seemingly defective) Olympus DSLR. A couple of weeks after buying it, a friend took a few of us fellow camera club members out on a mock workshop as he was thinking about selling workshops in the future. I warned him I knew very little about the camera and very little about just about everything photography related (I barely comprehended exposure). I apparently was the perfect specimen. 😇 We drove to our location not far from the entrance to the Everglades, and was quickly socked in by fog. So much so we missed the turn because we couldn't see the sign until we got right on top of it. We wandered around and all of us faced east towards the island and sun to wait on the rising sun. As the sun rose it was diffused by the fog, and we all took awesome shots. Then he said "don't let your tripod grow roots". So I gave my best 'petulant-child' reaction and rolled my eyes at him. But I did what I was told and picked it up and moved over towards the wooded area, perpendicular to the sun, and took a line of shots from left to right till I got back to the lake. Like I said, I knew absolutely nothing about composition or rules, I just pointed at what looked good, and pressed the button. I also didn't know about RAW or Lightroom; and Photoshop? Ha! That was just a program that made models look fake... 👀; so ignorant I was huh? So this original image is a JPG. Thank heavens he caught this faux pas on my part and forced me at least to shoot RAW + JPG. (I bought the Adobe creative cloud a few weeks later.) Thinking nothing of this image at the time, we headed off into other wonderous locations after the fog burned off. Then back to his house to do a bit of processing. I didn't want anyone to look at my images. I was the least experienced of the group, and most embarrassed at what I shot. But he looked at them and said they weren't half bad, and then he got to this one and really liked it. I was all beaming inside of course. I impressed the "teacher"! So he did a few edits and put it on my USB drive (remember, I didn't have any editing software, yet) so I could share it on social media later. Which I did. My biggest fan, my ex but still best friend, absolutely LOVED it. He grew up in South Florida and this is what his neighborhood looked like before being heavily developed. He loved it so much he wanted a print. My first sale! I was so proud, as was he. He even bought me metallic Sharpies to sign it for him. LOL I of course charged him the whopping sum of... $cost. Such a salesperson I was... Fast forward four years and we're now in the thick of the COVID pandemic. The folks at Out of Chicago put on the first of it's kind 'Out of Chicago Live' an online conference the end of April that year. Of course I was in on that. My favorite photographers were part if it. Matter of fact, I think just about everyone's favorite photographers were part of it. Over 70 pros were in on the first annual event. I made sure to get my one image review session with my favorite, Adam Gibbs, and Alister Benn who I had just found on the YouTube. We were allowed 5 images and this was one of them. Then they chose one image out of the 5 to review online live. This obviously was the one they chose as well. I was flabbergasted when they both agreed this was a fabulous image. Both offered some suggestions on a minor edit but were very pleased with it at the time. So late that night, with lollipops rainbows and unicorns dancing in my head, I went back into Lr and Ps to see if I could implement their suggestions. I did, but it turned out way too blue for my tastes. The next day I decided, with a clear head, to start over from scratch. It had been so long since I saw the original I forgot that there was a whole tree cropped out of the left. I put that back in. Really took my time with it and reposted it to social media. I then shared it on NPN for a critique and received high praise and was even shared on their own IG as photo of the day. Needless to say, I'm very happy with this now, the way it is. I think even Kevin would be happy with the edits. So this might just be my next print. I do love it so. Thanks for reading this far if you did. I do tend to ramble on when passionate about something. 😄 Enjoy!

This Adobe Photoshop Course Online - misty-pines on net.photos image has 1024x576 pixels (original) and is uploaded to . The image size is 256133 byte. If you have a problem about intellectual property, child pornography or immature images with any of these pictures, please send report email to a webmaster at , to remove it from web.