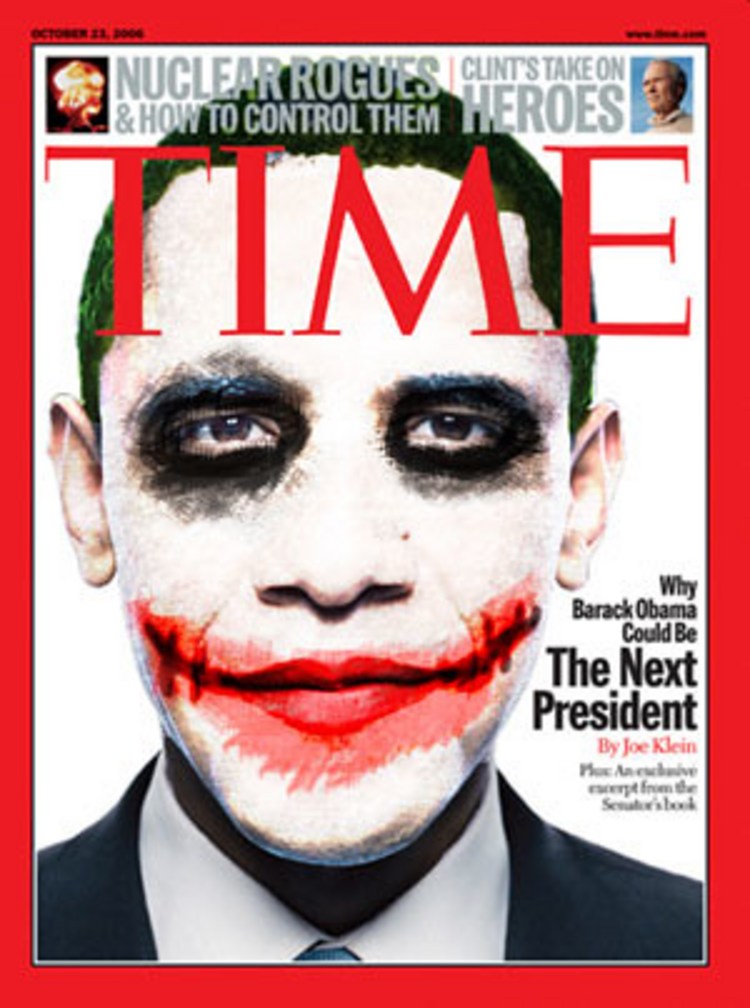 "Flickr had removed the Joker image due to copyright-infringement concerns, Alkhateeb says the company told him in an e-mail. A Flickr spokeswoman declined to comment due to a company policy that bars discussing inquiries about individual users." There's an interesting piece over at the Los Angeles Times today about the unmasking of the author of the iconic Obama/Joker photo (above). The photo recently began turning up in Los Angeles with the word "socialism" printed underneath it in similar style to the famous Shepard Fairey Obama HOPE poster and since then has been the subject of considerable debate and online interest. It turns about that, according to the Times, a 20-year-old college student from Chicago, Firas Alkhateeb, is the artist behind the work. Apparently Alkhateeb made the image using Adobe's Photoshop software. After creating the image Alkhateeb posted it to his Flickr account and ended up getting over 20,000 views on it. 20,000 views that is until Flickr pulled the image down censoring him, along with everyone who commented on the image, citing "copyright-infringement concerns," according to the Times. Personally I think it's too bad that Flickr decided to censor this iconic image. Whatever you may or may not think about this image and it's appropriateness, the image would absolutely and unequivocally be considered parody and parody has always been one of the most effective defenses against any copyright complaint. Parody is why Weird Al gets away with creating a song called "Eat It," directly to the tune of Michael Jackson's "Beat It." What's more, in the interest of free speech, political parody *especially* is perhaps given the widest berth of all. This is why Ralph Nader was able to directly rip MasterCard's "Priceless" campaign and why the courts subsequently ruled in his favor after MasterCard sued him over it. Earlier today, a friend and Flickr contact of mine from DMU, A Boy and His Prime, who is a law student, put it more directly. "If you produce something that is transformative, and not derivative, then it's fair use (Folsom v Marsh). In Campbell v Acuff-Rose, 510 U.S. 569, Souter seemed to suggest that the main idea is substitutability, and that makes a lot of sense when you consider what copyright protects (i.e. your interest in your own work). The Jokerbama does not replace the original photo in any sense." I'm not a lawyer myself of course and would be interested if anyone else out there who is would like to add comment as well. Personally, I think it's unfortunate that Flickr would embark upon yet another act of censorship when an image was so clearly parody and fair use. What bothers me even more is that this is still another example of Flickr censoring users who are critical of President Obama and his policies. In June Flickr deleted the entire account and photostream of Flickr user Shepherd Johnson after he posted comments critical of the President on the Official White House Photostream. Now I'm actually a Democrat who voted for President Obama and am super happy to see the President using Flickr. But while Flickr's staff is obviously proud of the fact that they have President Obama's official photostream on Flickr, I don't think that this fact ought to be the impetuous for them to censor and delete users who are critical of the President. I'm also troubled by this censorship in light of the clear pro-Obama bias that Flickr's staff has shown. If you do a search for the word "Obama" on the flickr blog you get 74 different results, many of them very positive. By contrast a search for "Bush" on the Flickr blog only pulls up 5 results (even though Flickr has existed much longer under President Bush's presidency than President Obama's). Now I have no trouble or problem with anyone on Flickr staff or anyone at Yahoo personally supporting whatever candidate they want. Yahoo CEO Carol Bartz personally contributed to both Bush and McCain and currently serves as a finance co-chair for Republican Gubernatorial candidate Meg Whitman's finance committe. But I think when personal politics begin to take on a bigger role in corporate communications and especially when it begins resulting in politically motivated censorship that things have gone too far in the wrong direction. I hope that Yahoo does in fact consider it a mistake in hindsight to have deleted this clear fair use image critical of the President and that they take steps to ensure that this sort of politically motivated censorship by Flickr Staff is curtailed in the future. I've contacted Alkhateeb about his image deletion and will hopefully be able to report back with more directly from him when I hear back from him. I've also posted the exact same image that Flickr deleted to my own photostream. Let's see if Flickr decides to censor me as well.

This Adobe Photoshop Course Online - flickr-censors-political-image-critical-of-president-obama on net.photos image has 300x403 pixels (original) and is uploaded to . The image size is 44126 byte. If you have a problem about intellectual property, child pornography or immature images with any of these pictures, please send report email to a webmaster at , to remove it from web.