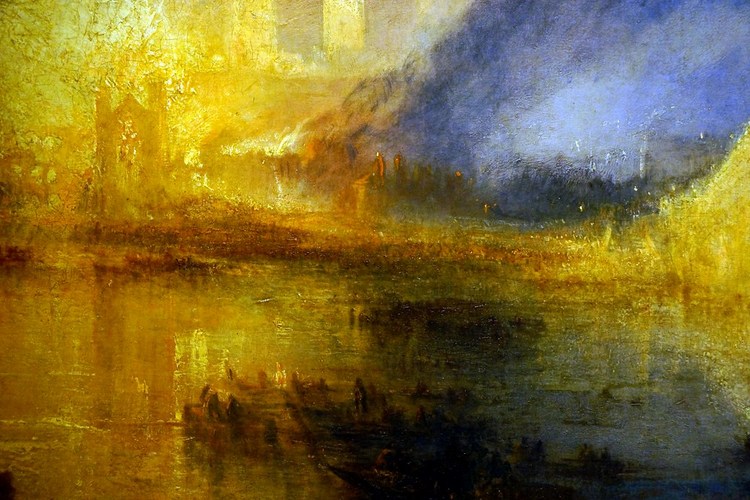 Joseph Mallord William Turner English Born 1775 – 1851 Detail from The Burning of the Houses of Parliament, October 16, 1834 1834 or 1835 Oil on canvas Shortly before 7 o’clock last night the inhabitants of Westminster and of the districts on the opposite bank of the river, were thrown into the utmost confusion and alarm by the sudden breaking out of one of the most terrific conflagrations that has been witnessed for many years past….The Houses of the Lords and Commons and the adjacent buildings were on fire. So wrote the London Times on October 17, 1834. Turner witnessed the event, along with tens of thousands of spectators, and recorded what he saw in quick sketches that became the basis for this painting. Flames consume Saint Stephen’s Hall, the House of Commons and eerily illuminate the towers of Westminster Abbey, which would be spared. On the right the exaggerated scale and plunging perspective of Westminster Bridge intensify the drama of the scene, which Turner observed from the south bank of the Thames River. The John Howard McFadden Collection. M 1928-1-41. From the Placard: The Philadelphia Museum of Art. NY Times Art Critic Roberta Smith review of Mike Leigh’s film “Mr. Turner” www.nytimes.com/2015/01/02/arts/an-art-critics-view-of-mr...

This Abstract House Reviews - the-burning-of-the-houses-of-parliament-october-16-1834-pma-12- on net.photos image has 1024x683 pixels (original) and is uploaded to . The image size is 212218 byte. If you have a problem about intellectual property, child pornography or immature images with any of these pictures, please send report email to a webmaster at , to remove it from web.