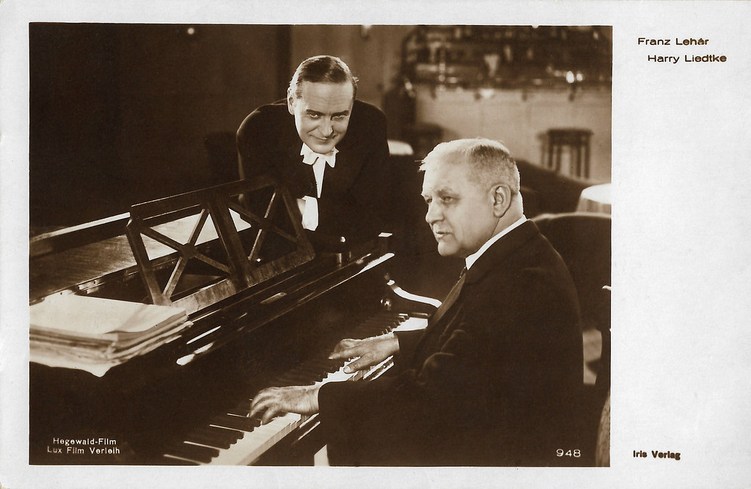 Austrian postcard by Iris Verlag, no. 948. Photo: Hegewald-Film / Lux Film Verleih. Harry Liedtke and Franz Lehár in Das Fürstenkind/The prince child (Jacob Fleck, Luise Fleck, 1927). German actor Harry Liedtke (1882-1945) was the charming ladykiller of many early silent classics. Detective serials like Joe Deebs made him one of the first male stars of the German cinema. Harry Liedtke was born in Königsberg, East Prussia (today: Kaliningrad, Russia) in 1882. He was the seventh of eleven children of an import and export merchant who dealt with linseed and hemp. After the death of his father in 1896, he grew up in an orphanage and began a qualification in the retail business. During a visit to Berlin, Liedtke met Hans Oberländer, the artistic director of Königliches Schauspielhaus. After several acting lessons, he became a cast member at Stadttheater Freiberg, Saxony. He had some more theatre engagements, and in 1908 he went to New York for one year to play at the New German Theatre. After his return to Germany, his career finally got ahead with engagements at the Hof- und Nationaltheater in Mannheim and the Residenz-Theater and Deutschen Theater in Berlin. Very early he came in contact with the medium film. In 1912 he made his film debut in Zu spät/Too Late (Carl Froelich, 1912), produced by film pioneer Oskar Messter. In the following years, he personified the elegant gentleman and youthful charmer in many productions of the Messter studio, like Eva (Curt A. Stark, 1913) starring Henny Porten, and Schuldig/Guilty (Hans Oberländer, 1914) with Leopoldine Konstantin. In 1916 he became a widely popular star as the detective Joe Deebs in short adventure films like Wie ich Detektiv wurde/How I Became Detective (Joe May, 1916), and Das Rätselhafte Inserat/The Mysterious Advertisement (Karl Gerhardt, Joe May, 1916). Now, famous directors wanted Harry Liedtke for their films, and he developed into one of the first male stars of the German cinema. With director Paul Leni, he made Prima Vera/Camille (1917) opposite Erna Morena, Dornröschen/The Sleeping Beauty (1917) with his wife Käthe Dorsch, and Das Rätsel von Bangalor/The Mystery of Bangalore (Paul Leni, Alexander Antalffy, 1918) with Conrad Veidt. With Ernst Lubitsch he celebrated great successes in the Fledermaus-adaptation Das fidele Gefängnis/The Merry Jail (1917) with Ossi Oswalda, Der Rodelkavalier (1918), Die Augen der Mumie Ma/The Eyes of the Mummy Ma (1918) with Emil Jannings, Das Mädel vom Ballet/The Ballet Girl (1918), Carmen (1918) with Pola Negri, Die Austernprinzessin/The Oyster Princess (1919), Madame Dubarry (1919), Sumurun/One Arabian Night (1920), and Das Weib des Pharao/The Wife of the Pharaoh (1922) with Dagny Servaes. Other popular films were the Frank Wedekind adaptation Lulu (Alexander Antalffy, 1917) with Erna Morena, the Detective series Der Mann ohne Namen/The Man Without a Name (Georg Jacoby, 1921), the comedy Die Finanzen des Grossherzogs/The Grand Duke's Finances (F.W. Murnau, 1924) starring Alfred Abel, Nanon (Hanns Schwarz, 1924) starring countess Agnes Esterhazy, and Der Feldherrnhügel (1926) with Olga Tschechova. In the second half of the 1920s, Harry Liedtke appeared in many silent operettas such as Liebe und Trompetenblasen/Love and Trumpet Playing (Richard Eichberg, 1925) with Lilian Harvey, Die Försterchristel/The Bohemian Dancer (Friedrich Zelnik, 1926) with Lya Mara, and Ich küsse Ihre Hand, Madame/I Kiss Your Hand Madame (Robert Land, 1929) with Marlene Dietrich. When the sound film arrived Liedtke’s career slackened off. His voice turned out to be unsuitable. He got supporting roles in such films as Preußische Liebesgeschichte/A Prussian Love Story (Paul Martin, 1938) with Willy Fritsch, and Quax, der Bruchpilot/Quax, the Crashing Pilot (Kurt Hoffmann, 1941), but leading roles were left over more rarely. He changed inevitably from a ladykiller to a graying gentleman. With his leading role in the comedy Sophienlund (Heinz Rühmann, 1942) he could prove his acting skills. His final role was the lead in Das Konzert/The Concert (Paul Verhoeven, 1944). During the invasion of the Red Army in April 1945, Harry Liedtke and his third wife, actress Christa Tordy were murdered by Soviet soldiers in their own house in Bad Saarow-Pieskow. One of the Russians smashed a bottle over Liedtke's head when he tried to save his wife from being raped. Harry Liedtke first had been married to Hanne Schutt. From 1920 till 1928, he was married to the actress Käthe Dorsch. Sources: Thomas Staedeli, Wikipedia, Filmportal.de, and IMDb. For more postcards, a bio and clips check out our blog European Film Star Postcards.

This 2021 August 15 Independence Day How Many Years - harry-liedtke-and-franz-leh-r-in-das-f-rstenkind-1927- on net.photos image has 1024x667 pixels (original) and is uploaded to . The image size is 150682 byte. If you have a problem about intellectual property, child pornography or immature images with any of these pictures, please send report email to a webmaster at , to remove it from web.